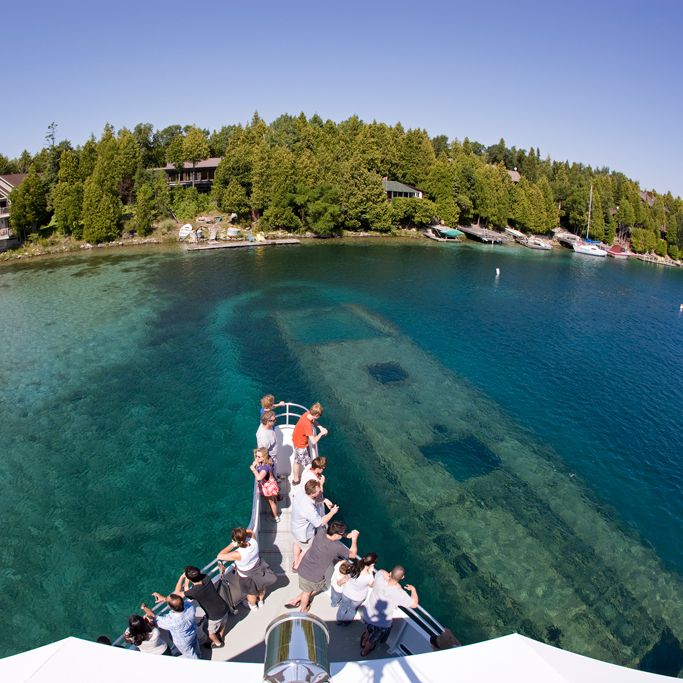 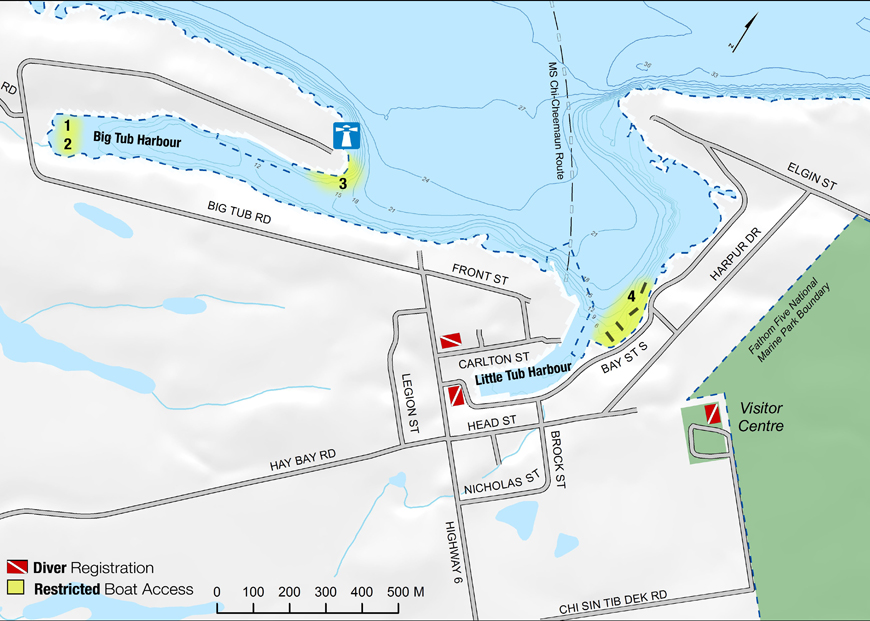 Photo and info from Parks Canada

Except for the white, numbered areas shown on the map, diving is prohibited in the Tobermory harbours. Visitors are asked to respect the rights of private property and adjacent landowners.

Extreme care should be taken at all times, since considerable vessel traffic may be encountered. All divers must be within 30 metres or 100 feet of a displayed dive flag.

Tour boats do enter the Big Tub shipwreck area. Divers MUST follow the special operational policies for this site.

From the last Friday in June to the end of Labour Day (first Monday in September) inclusive:

This two-masted schooner was damaged off Cove Island and then towed to Big Tub Harbour where it sank in September 1885. The hull of the vessel is still intact with the windlass and a portion of the bow rail still in place. For both conservation and safety reasons no penetration of the wreck is permitted. One of the most popular wrecks in the park, it is visited by divers, snorkelers and tour boat passengers.

The City of Grand Rapids was an elegant passenger steamer until it burned and sank in October 1907. Its charred remains now lie in shallow water about 30 metres (100 feet) from the wreck of the Sweepstakes. Its rudder and propeller are displayed at the St. Edmunds Township Museum. This site is suitable for both divers and snorkellers.

Submergence of the Niagara Escarpment provides an interesting wall dive. Look for numerous crayfish in crevices in rock. For your safety, contain diving to the area inside the restricted boating markers.

This is a good site for both divers and snorkellers. Popular site for open water check-outs and those wanting to observe divers in action. Site plan maps for this site are available at the Diver Registration Office. Divers are asked to contain diving activities to the area inside the restricted boating buoys. 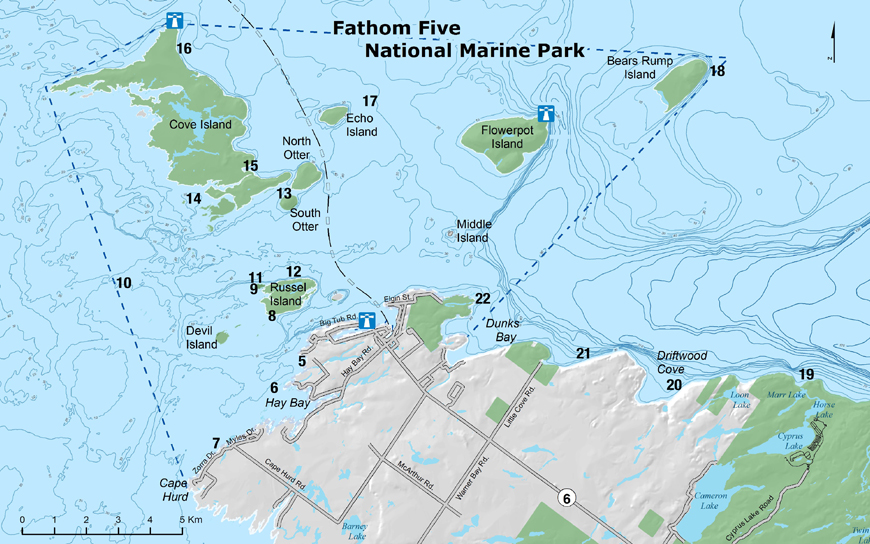 Image and info from Parks Canada

6. AVALON VOYAGEUR II (Motor ship) Length: 41.2 m (135 ft) Depth: maximum depth 8 m (25 ft)
The Avalon served in the Newfoundland fish trade for 30 years and was then used as a floating restaurant in Kincardine. In October 1980, while on a relocation trip to Owen Sound, she was stranded and subsequently burned by vandals. Only the bottom portion remains but there is quite a bit of machinery.

7. CASCADEN (Schooner) Depth: maximum 6 m (20 ft)
Wrecked in October 1871, the vessel is badly broken up and spread over a large area.

13. TRUELLEN (Yacht) Length: 12 m (40 ft) Depth: 16.7 m (55 ft)
Wrecked on the Greenfield Shoal in 1972. It was salvaged but later found to be too badly damaged and towed out to the channel between Cove and North Otter Islands for use as a dive site.

16. UNIDENTIFIED WRECK Depth: maximum 21 m (66 ft)
Sections of wreckage strewn over a distance of 120 m at a depth between 15 and 21 m. Site includes the remains of three hull sections, the centreboard trunk as well as the board, plus the rudder. Look for the many interesting and unusual structural features.

17. ARABIA (Three-masted barque) Length: 40.1 m (131.6 ft) Depth: maximum 33.5 m (110 ft)
Foundered off Echo Island in October 1884. The wreck is in good condition. The bow section with bowsprit, windlass and anchors, is particularly impressive. This site is only recommended for advanced diving groups. There may be strong currents, take weather conditions into consideration.

19. THE CAVES Depth: The submerged grotto entrance is 6 m (20 ft) deep.
Located along the Georgian Bay shoreline about 19 km (12 mi) east of Tobermory. Look for the hidden passages leading from inside the Grotto to the open waters of Georgian Bay. Diving access via boat from Tobermory.

20. CAROLINE ROSE (Schooner) Length: 39.6 m (132 ft) Maximum depth: 16.5 m (55 ft)
The Caroline Rose was towed to Driftwood Cove on the Georgian Bay Shore by the Tobermory Marine Association and sunk as a dive site in 1990. Located outside the park, there are a variety of tools and fittings on site including an impressive stem, rudder and propeller.

21. NIAGARA II (Sandsucker) Length: 5.5 m (182 ft) Depth: 28 m (90 ft)
Deliberately sunk by the Tobermory Maritime Association in May 1999 as a dive site. Located outside the park, look for commemorative plaques and lots of machinery.

22. DUNKS POINT
Interesting geological formations, including good examples of “pitting”. A wooden-stocked anchor and chain lie just off the point about 18 m (60 ft) of water.